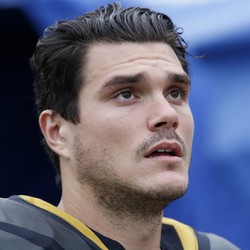 Josh Lambo makes all his kicks in Week 17 win

Josh Lambo was 3-for-3 in field goal attempts and made all three of his extra point tries for 12 points on Sunday as the Jaguars beat the Colts by a 38-20 score.

Lambo had one of the most accurate seasons for a kicker as he was 33-for-34 in field goal attempts and missed just two extra points all season. The veteran kicker will be a must-own in fantasy if he can get on a team with a strong offense.

Deposit $10 at a DFS partner site you have NOT played at and get a FREE 6 Month HOF Subscription!
Claim Offer
Most Accurate Experts
for Josh Lambo
Consensus Rankings
View all Flex Rankings