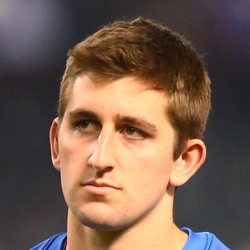 The Dolphins have reportedly received calls from other teams about QB Josh Rosen.

The Dolphins are in “no hurry” to trade Rosen, per Mike Giardi of the NFL Network. It was reported that Miami hasn’t given up on Rosen’s development and the team believes there’s a chance the 23-year-old QB could succeed in the NFL. Rosen struggled mightily in 2019, throwing for 567 yards and a 1:5 TD:INT ratio across six games. He expects to be third on the QB depth chart behind Ryan Fitzpatrick and Tua Tagovailoa. Rosen is merely a dart throw in dynasty league formats.

Deposit $10 at a DFS partner site you have NOT played at and get a FREE 6 Month HOF Subscription!
Claim Offer
Who Should I Draft?
Most Accurate Experts
for Josh Rosen
Consensus Rankings
View All Rankings
Do Not Sell
Are you looking to contact Customer Support about a subscription or account related question?
Yes
No, I'm a California resident looking for the California Consumer Privacy Act form