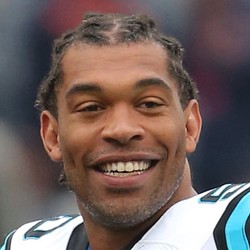 Julius Peppers only defensive lineman to apply the pressure Week 11

The seemingly ageless Carolina defensive end Julius Peppers was the only defensive lineman to record a sack in the loss versus Pittsburgh Thursday night. While Kawann Short did record a tackle for a loss along with his two solo tackles and one assist, it was Peppers who got to the quarterback for a sack adding to his one solo, two assists, one tackle for a loss and one pass defended stat line.

Although the 38-year-old is still showing signs here and there like he was still in his prime age, IDP owners will want to keep in mind he will be a risky option heading into the fantasy football playoffs. On the season his numbers are currently hit or miss with only twelve combined tackles, two for a loss, two forced fumbles, and three sacks. Of course, we can't discount the idea that Carolina is holding his snap count in check to keep him fresh for a real-life playoff run, but at this time he should be looked at as more than just a depth player in case that isn't the case. The next couple of contest will let us know more whether they unleash him to try and maintain a chance at even making the NFL playoffs over the next couple of weeks. Overall it is a wait and see scenario.