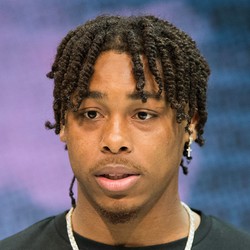 Justin Jefferson landed in a beautiful spot for fantasy football, as he steps in alongside Adam Thielen and will assume the Stefon Diggs role. Thielen and Jefferson are the only true players there that should command targets and we know that Thielen has started to deal with some injuries the past couple of years. Jefferson should easily see over 100 targets in year one and may bring even more upside if something were to happen to Adam Thielen.

Justin Jefferson expected to play in the slot 'quite a bit'

Vikings offensive coordinator Gary Kubiak says Justin Jefferson will play in the slot "quite a bit" this season.

"That's something he's exceptional at" Kubiak added. Jefferson ran 78% of his routes from inside last year and it's clear that the Vikings want him to continue a role he has had success with. Adam Thielen will likely play a lot more outside this year with Jefferson in town and Stefon Diggs traded to Buffalo.