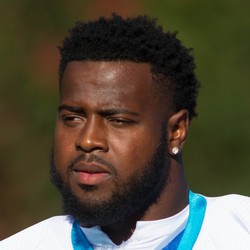 Carolina defensive tackle Kawann Short was really the only defensive lineman to manage to make an impact in the loss to Seattle Sunday at home. He recorded two solos, four assisted tackles and added a tackle for a loss. The closest overall to be slotted into the second spot would have been the defensive end Mario Addison with just four assisted tackles. There was no sack recorded this contest by a defensive lineman. And the third spot would have been held with only one solo by a couple of players.

For any IDP owners who had slotted in Short, they enjoyed one of his better contest on the season. For any owners inserting any of the other defensive linemen it likely left them wanting more. Short hasn't exactly been a top tier option on average each week, but he has managed some consistency that keeps him on the IDP radar any given Sunday. After the upper top of the top tier players finding a defensive lineman that records some type of statistics each week can be very valuable over a hit and miss player who many IDP owners try to hit the big one with and end up taking zero points pretty often. Short should remain in play for the rest of the 2018 season for owners heading into the fantasy playoffs.