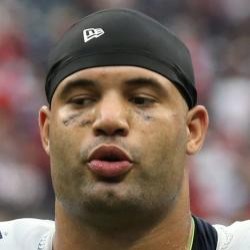 Kellen Davis was once again held without a catch this week, as he was not even targeted in Week 5 against the Pittsburgh Steelers.

Kellen Davis was already pretty much irrelevant for fantasy purposes, and the arrival of Austin Seferian-Jenkins is going to cut into Davis's playing time and production going forward. Davis has zero catches through the first five weeks, and he is not someone you can count on for fantasy production right now.