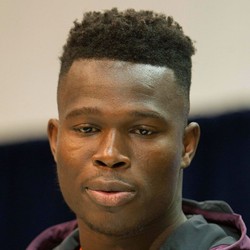 When watching Harmon, you wouldn't have guessed that he's 6-foot-3 and 214 pounds. It's because he moves extremely well and doesn't necessarily play the go-up-and-get-it role that most wide receivers his size do, though he is very good in contested catch situations. He has excellent hands, great awareness, and does very well adjusting on back-shoulder throws. He can use some refining in his route-running, as a lot of his receptions were contested, and it's only going to get harder at the next level. He's also not much of a yards after the catch receiver. His Combine performance was one to forget, as he tested poorly and didn't showcase anything of significance.

Washington wide receiver Kelvin Harmon caught three of his five targets for 33 yards in Sunday's loss to the Dallas Cowboys.

Harmon finishes his rookie season with 30 receptions for 365 yards and no touchdowns.