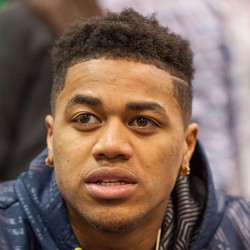 The 49ers receiving corps is one major question mark this season. There are several players who could contribute, so it's simply a guessing game at this point as to which one is going to be worth watching for fantasy football. At this time, Bourne has as good of a shot as any of the other options to see significant playing time in this offense. With that being said, we'll need to monitor training camp reports before we come to an exact conclusion. For right now, Bourne's worth adding in deep Dynasty leagues until we get more clarity.

Kendrick Bourne and 49ers have had discussions on a contract extension

Matt Barrows of The Athletic is reporting that the 49ers have had discussions with WR Kendrick Bourne regarding a contract extension.

Bourne signed his second-round tender with San Francisco to the tune of one-year, $3.259M earlier this offseason. He’s been a consummate red zone target for Jimmy Garoppolo and the 49ers over the past two seasons, catching a TD pass every eight receptions. With Deebo Samuel set to miss some time due to a foot injury, Bourne by default becomes one of the leaders in the wide receiver room. He’s already taken rookie WR Brandon Aiyuk under his wing during offseason workouts. Bourne should be considered a late-round flier in fantasy drafts this season especially if Samuel is too spend the early part of the season on the PUP list.