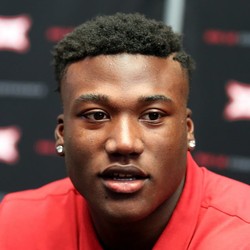 Monitors the plays extremely well. Can bring speed off the edge, gets his pads low. Blew by Texas Tech LT with his speed. Good closing speed, reacts quickly. Not the fastest guy but has good burst. Sees beyond the carnage at the LOS to where the ball is/where it's going. Not really a sideline to sideline guy, but rather a sturdy presence over the middle of the field. Can be a bit too indecisive at times. He does have a good build to him, looks like an NFL linebacker. Surefire tackler when he smells blood in the water. Takes good angles in the open field. Better against the pass than the run. Should have no issues covering RBs out of the backfield.