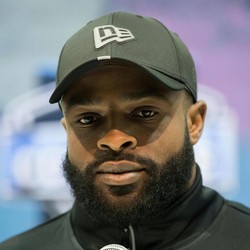 Very stiff runner, doesn't have much wiggle to his game. Watched a play against LSU where he had one defender in front of him in the open field, but he didn't try to juke or anything; he was tackled. He's a tough task to tackle most of the time, though, as it's the strength of his game - breaking tackles. He's a straight-line runner who will get what's blocked for him. Willing pass protector. He's a competent pass-catcher, though nothing to write home about.