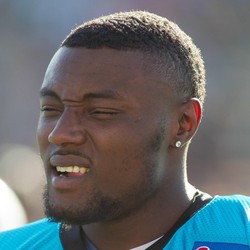 Buzz is building for WR Keyarris Garrett at NFL combine

WR Keyarris Garrett led the FBS in receiving yards in 2016, but was often overlooked by scouts heading into the NFL combine. Pegged as a day-three prospect who ran a limited route-tree, he proceeded to show some of the best hands of any receivier at the combine. At 6'3", 220 lbs, and running a 4.53 40-yard dash, team scouts will surely be buzzing over this late-round sleeper.

Keyarris Garrett has all the tools that make up a great NFL receiver, but he will have to work on his route-running and prove to teams he is more than a vertical-threat in order to boost his draft stock. He is likely going to be taken in rounds 5-7, but could rise with a strong pro day outing. He is best suited at a number two wideout in the NFL.