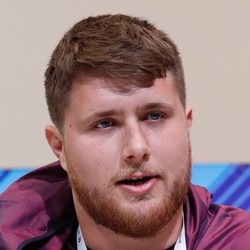 Kolton Miller to the Raiders with No. 15 pick

This is one of the biggest shocks of the draft so far, as most didn't see Miller going inside the top-20 picks, let alone in front of Connor Williams. The Raiders have a hole at right tackle, but Miller was always projected to play left tackle in the NFL. This could be a move of the future as Donald Penn isn't getting any younger. Whatever the case, Miller feels like a reach at this point in the draft. Maybe the Raiders should've moved back with the Bills, who just moved up in the draft right behind them.