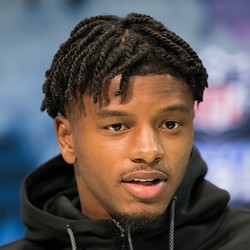 He's not afraid to get up in the receiver's face and play press coverage. He doesn't want to allow anything. Alabama didn't want to target him at all. Maybe three or four balls his way. Can play on both sides, almost always tight. Very good change of direction, stays low in his stance in backpedal. Played a ton of man coverage. Really liked watching his tape. Going to be a contributor right away.