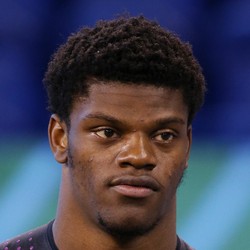 Jackson's going to have an absurd price tag this draft season, but the crazy thing is...he actually might be worth it. Jackson's rushing ability is a cheat code at the QB position and he has the potential to single-handedly win you a week because of it. Jackson should be off the board as either the first or second QB drafted.

Ravens prized QB Lamar Jackson posted a video on his Instagram stories that showed him playing football on the beach, juking out a defender, and then unfortunately crashing into a stationary jet ski. Jackson, thankfully, is just fine and not injured, according to sources.

Jackson was playing football on the beach, breaking ankles like he has done the last two seasons in the NFL. After escaping a rusher, Jackson put on the jets and burst down the beach before tumbling over a jet ski that seemed to be in his way. Fortunately, Jackson has avoided injury, but I’m sure Ravens brass would like to see their most important asset take it easy on extracurricular activities like this one. Jackson is a top-2 fantasy quarterback this season along with Patrick Mahomes, and they sit in a tier all by themselves. Look for the 2019 MVP to follow up his incredible season with another season full of electrifying plays.

(2020)
View Full Schedule
Who Should I Draft?
Most Accurate Experts
for Lamar Jackson
Do Not Sell
Are you looking to contact Customer Support about a subscription or account related question?
Yes
No, I'm a California resident looking for the California Consumer Privacy Act form