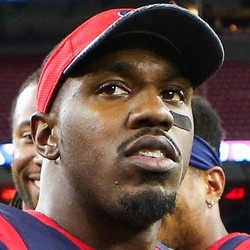 Free agent RB Lamar Miller posted two workout videos of himself on Thursday, eight months after he suffered a torn ACL in the preseason last year.

Miller missed the entire 2019 campaign after having surgery to repair a torn ACL he suffered in a preseason game against the Cowboys in late August. He seems to be doing well in his rehab, but teams will be hard-pressed to clear him medically given the current league conditions. The eight-year veteran has played for Miami and Houston, totaling 5,864 yards and 32 TDs on the ground in 105 career games.

Deposit $10 at a DFS partner site you have NOT played at and get a FREE 6 Month HOF Subscription!
Claim Offer
Who Should I Draft?
Most Accurate Experts
for Lamar Miller
Consensus Rankings
View All Rankings
Do Not Sell
Are you looking to contact Customer Support about a subscription or account related question?
Yes
No, I'm a California resident looking for the California Consumer Privacy Act form