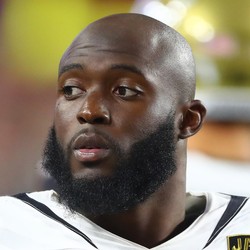 After trying to trade him prior to the NFL Draft, Fournette appears destined to play for the Jaguars once again in 2020. With Jay Gruden calling the offense, they should be much more efficient this year, though Fournette's volume made him a great play throughout 2019. The only running backs who offered RB2 or better numbers more often than Fournette in 2019 were Christian McCaffrey, Ezekiel Elliott, Dalvin Cook, and Austin Ekeler. Do they go with more of a timeshare under Gruden? it's possible, but he should still offer low-end RB1 value.

The Jaguars are declining Leonard Fournette’s fifth-year option and he should become a free agent after the 2020 season.

Fournette reportedly has been shopped around by the Jaguars all off-season. The team has declined his fifth-year option as they are ready to move on from the 25-year old running back. He could be traded at some point this season, but for now Fournette will remain in Jacksonville for at least one more season. Fournette logged 265 carries for 1,152 yards and three touchdowns across 15 games in 2019. He is currently 17th among all running backs in the latest expert consensus rankings.

Deposit $10 at a DFS partner site you have NOT played at and get a FREE 6 Month HOF Subscription!
Claim Offer
Who Should I Draft?
Most Accurate Experts
for Leonard Fournette
Consensus Rankings
View All Rankings
Do Not Sell
Are you looking to contact Customer Support about a subscription or account related question?
Yes
No, I'm a California resident looking for the California Consumer Privacy Act form