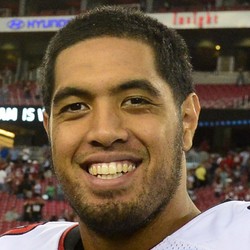 Levine Toilolo caught an eight-yard touchdown pass from kicker Matt Prater on a fake field goal in the second quarter of the 31-0 win over the Packers. Toilolo finished with four receptions for 43 yards.

Toilolo emerged as the Lions top TE over the second half the season. He finished the year with 21 receptions for 263 yards.