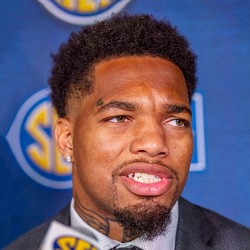 Bowden's a fun tape evaluation and the Raiders clearly have a role planned out for him in this offense. With that being said, it's unlikely that it leads to fantasy production any time soon. With Josh Jacobs and Jalen Richard present, it's hard to envision Bowden seeing significant work out of the backfield. Additionally, Hunter Renfrow has the slot role locked down in Las Vegas. Bowden's most likely to be a kick returner and/or schemed touches player in 2020, but he could take over the Jalen Richard role in 2021.

Lynn Bowden Jr. officially listed as a running back by the Raiders

Lynn Bowden Jr., who played a variety of positions for the Kentucky Wildcats in the SEC, including wide receiver and quarterback, has been officially listed as a running back by the Las Vegas Raiders on their team website.

There is some speculation as to whether being listed as a running back or a wide receiver would more beneficial for him in terms of Bowden's relevance in fantasy football. Regardless, the Raiders have announced their intentions of using him as a "utility player" in their offense, similar to how the Saints have been using Taysom Hill. Behind second-year star Josh Jacobs the other running backs on the roster include: Jalen Richard, Rod Smith and William Stanback. It will be interesting to follow this story into the summer to see if fans can gain any insight into how heavily involved the Raiders plan to utilize Bowden in their offense.