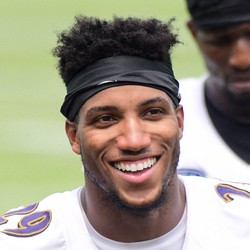 Marlon Humphrey breaks up two passes against the Bills

Humphries and the Baltimore secondary played well against Buffalo, limiting Josh Allen to a 43.5% completion percentage and just one touchdown. Humphry's also accounted for two of the eight pass breakups caused by the whole Ravens defense. Their next game comes against the Jets on Sunday.