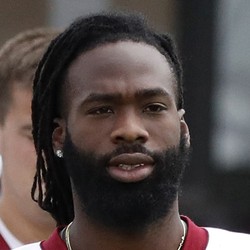 Matt Jones catches six passes against the Patriots on Thursday

Jones is a longshot to make the final roster, but injuries to Donnell Pumphrey and Josh Adams and left the door cracked open. One of the biggest criticisms against him is that he is not an adept receiver out of the backfield, but he has clearly been working on changing that in training camp. Jones himself missed time earlier in training camp due to injury, so he still has a long way to beat out the aforementioned Phumphrey and Adams and Wendell Smallwood.