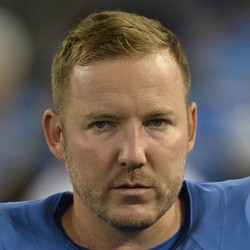 Matt Prater made both of field-goal attempts and both of his extra-point attempts in the Lions’ 23-20 loss to the Packers on Sunday.

Prater played though an illness that had him listed as questionable heading up to the contest. He was perfect on all of his attempts, including a 56-yarder. He'll end the year as a K1.

Deposit $10 at a DFS partner site you have NOT played at and get a FREE 6 Month HOF Subscription!
Claim Offer
Who Should I Draft?
Most Accurate Experts
for Matt Prater
Consensus Rankings
View All Rankings
Do Not Sell
Are you looking to contact Customer Support about a subscription or account related question?
Yes
No, I'm a California resident looking for the California Consumer Privacy Act form