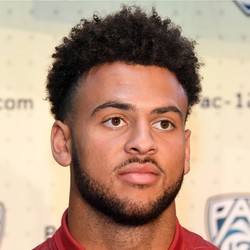 Michael Pittman Jr. may have fallen into the best landing spot for any WR in this class. T.Y Hilton is on the last year of his contract and Parris Campbell is more of a gadget player that won't command an incredible amount of targets. Pittman is going to receive all the targets he can handle and he has the talent level to be a top-24 fantasy WR within the next two seasons.

Pittman is expected to contribute right away in Indy as the “X receiver” in Frank Reich’s offense. Parris Campbell figures to operate in the slot with T.Y. Hilton moving around in the formation. Pittman Jr. will need to build chemistry with Philip Rivers quickly if he wants to contribute right away. Nevertheless, he’s a sneaky option in redraft leagues and an even better option in dynasty league drafts this year. He should be a good one for Rivers and the Colts.