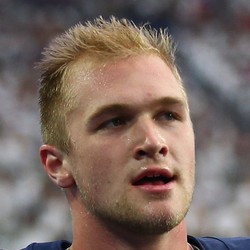 Mike Gesicki tops of 2019 with a touchdown

Mike Gesicki caught four of his seven targets for 34 yards and a touchdown in the Dolphins' Week 17 win over the Patriots.

Gesicki has been a strong producer of late, thanks in large part to an uptick in touchdown output. He'll remain on his rookie deal through 2021, and should be the clear-cut TE1 for Miami next season. Gesicki figures to be a popular late-round flier in August.

Deposit $10 at a DFS partner site you have NOT played at and get a FREE 6 Month HOF Subscription!
Claim Offer
Most Accurate Experts
for Mike Gesicki
Consensus Rankings
View all Flex Rankings