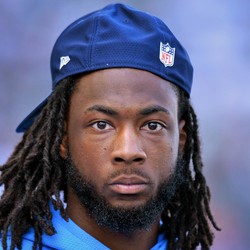 While Williams is an extremely talented wide receiver, this offense simply isn't going to have enough targets to go around to make Williams fantasy relevant this year. He'll have some big performances, but predicting which games those are going to be is going to be a nightmare. He's a player that I recommend letting someone else in your league draft.

Mike Williams will have his fifth-year option picked up by the Chargers which will keep him under contract through the 2021 season.

The speedy Williams has shown glimmers or excellence in his three years as a pro after being selected seventh overall in 2017. While his targets, receptions, and yards have gone up in each of his three seasons, he struggled to find the end zone last year, scoring just twice after catching 10 touchdowns in his sophomore campaign. His 6.0 targets per game in 2019 were good for 36th among wide receivers and his air yards were 38th. There are a lot of weapons on the Chargers roster, but Williams should sit comfortably behind Keenan Allen as the team's number two wide receiver. Our experts have Williams as the 40th ranked wide receiver, but if the Chargers can find some consistent quarterback play between Tyrod Taylor and Justin Herbert, and Williams is able to find the end zone he can definitely outperform his ADP.

(2020)
View Full Schedule
Who Should I Draft?
Most Accurate Experts
for Mike Williams
Do Not Sell
Are you looking to contact Customer Support about a subscription or account related question?
Yes
No, I'm a California resident looking for the California Consumer Privacy Act form