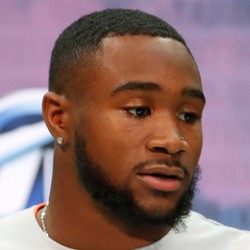 Sanders seems locked in to be the "main guy" in this backfield at this point of the offseason. While I still believe these other RBs will take away some work, Sanders should see over 270 touches in 2020. He's a high-end RB2 with top-10 upside right now.

Miles Sanders has the makings of a star, could push Eagles away from RBBC

Eagles beat writer Mike Kaye believes Philadelphia doesn’t need to add a veteran running back and that Miles Sanders has the ability to be a three-down back in the NFL.

The Eagles have been rumored to have interest in veteran free agents Devonta Freeman and LeSean McCoy, although nothing has come to fruition to-date. Kaye believes Sanders has the versatility to push the Eagles away from using a RBBC approach that has been widely speculated. Boston Scott should operate as a change-of-pace back, but Sanders is likely to shoulder the brunt of the workload in the Philadelphia backfield. Sanders could be on his way to a top-5 finish should he be the three-down back people expect him to be. If the Eagles bring in a veteran however, expectations can be tempered a bit, but he’s still a sure fire RB1 this season.

(2020)
View Full Schedule
Who Should I Draft?
Most Accurate Experts
for Miles Sanders
Do Not Sell
Are you looking to contact Customer Support about a subscription or account related question?
Yes
No, I'm a California resident looking for the California Consumer Privacy Act form