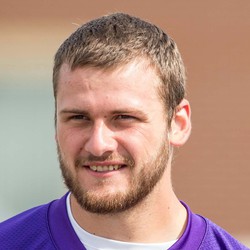 Moritz Boehringer, the first European to be chosen in the NFL draft, was waived by the Minnesota Vikings Saturday.

Boehringer was highly unlikely to be an on-the-field or fantasy contributor this season, as his inexperience currently trumps his impressive physical tools. That said, the Vikings probably hope Boehringer clears waivers so they can continue to develop him on their practice squad.