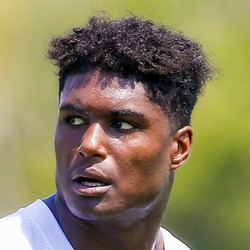 Jacksonville Jaguars star linebacker Myles Jack has been ruled out for Week 13 against the Tampa Bay Buccaneers.

Myles Jack will join Ronnie Harrison on the sidelines against the Buccaneers. The Jaguars were already going to have a tough time slowing down Mike Evans and Chris Godwin, and will now have much less talent on the field. Those who have Jack in IDP leagues need to make other plans. Consider Jack's absence an upgrade for the entire Buccaneers offense.

Deposit $10 at a DFS partner site you have NOT played at and get a FREE 6 Month HOF Subscription!
Claim Offer
Who Should I Draft?
Most Accurate Experts
for Myles Jack
Consensus Rankings
View All Rankings
Do Not Sell
Are you looking to contact Customer Support about a subscription or account related question?
Yes
No, I'm a California resident looking for the California Consumer Privacy Act form