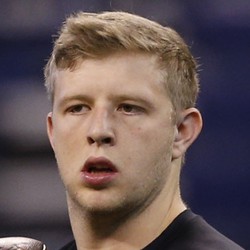 Quarterback Nate Sudfeld has agreed to return to the Philadelphia Eagles on a one-year deal, the team announced Tuesday.

Sudfeld entered last season as the top backup to quarterback Carson Wentz, but he found himself third on the depth chart behind Josh McCown after breaking his wrist in the preseason. He did not play in 2019, but the Eagles remain high on his potential, and he should enter training camp as the leading candidate to back up Wentz again in 2020.