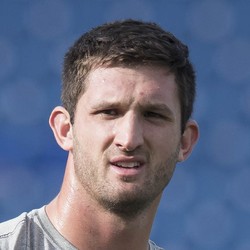 Nathan Peterman officially signed his $2.133M tender to play another season as backup for the Raiders.

Peterman was a backup last year and failed to record a single snap on the season for the Raiders. There's no chance that he would be able to wrestle the starting duties away from Derek Carr, and even if Carr were unable to play Peterman would likely not be on the fantasy radar.