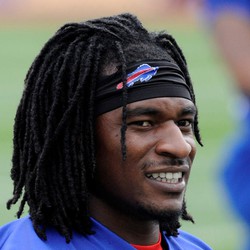 Buffalo cornerback Nickell Robey-Coleman had a big day Sunday in his former college stadium at Los Angeles, first jumping a sideline route and returning an interception 41 yards for Buffalo's go-ahead touchdown in the third quarter, then sealing the game with another pick on the Rams' final drive.

They were Robey-Coleman's first two interceptions of the season, and his second touchdown, as he returned a fumble all the way in Week 2. He's a playmaker when on the field, but as Buffalo's nickel corner (playing 58 percent of defensive snaps coming into the Rams game), he depends on big plays to get on the fantasy scoresheet.