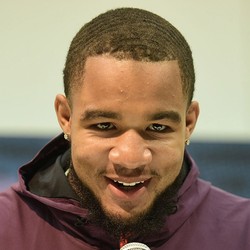 He's someone you really want to like after watching his film, but you mustn't forget that his level of competition was weakened. He has an initial burst to get to the quarterback, but if his first move doesn't work, you'll notice a big loss in energy. Oddly enough, he seems to be better against the run than he is against the pass. He doesn't get lost in the shuffle and slides over to make a tackle when most would lose track of the ball. There's potential here, but he was someone who needed to make a big impression at the Combine and didn't.