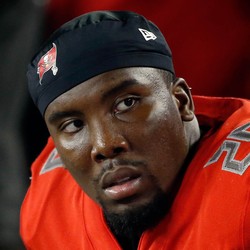 Barber never found sustained success with the Bucs, and will now try his hand with the Redskins. Unfortunately, it's a bad situation for Barber. Not only does he find himself in a below-average offense with a sub-par offensive line, he'll also be competing with Derrius Guice, Adrian Peterson, J.D. McKissic, Antonio Gibson, and Bryce Love. The amount of hurdles that Barber needs to clear to be relevant in fantasy are numerous, and there's no reason to consider him for fantasy purposes.

Peyton Barber is signing a two-year, $3M deal with the Washington Redskins

Barber joined the Buccaneers as an undrafted free agent in 2016. He’s played a key role in their backfield each of the last three seasons, carrying the ball over 100 times in each year. He led the team in rushing in 2018 with 871 yards and five touchdowns. In 2019, Tampa Bay shifted to a time-share in the backfield, rolling with Ronald Jones II in addition to Barber. Barber ended up as the odd man out towards the end of the season as Jones II started to shine for the Bucs. With Barber heading out and Tom Brady coming in to revitalize the offense, look for Jones II to get a massive opportunity to seize the starting RB job in Tampa. He could be a workhorse back in a Brady-led offense which could lead to him being a fringe RB1 in 2020. On the other side of the coin, the Redskins now have Adrian Peterson, Derrius Guice, J.D. McKissic, and Barber now under contract. Somethings got to give in Washington’s backfield, but seemingly Guice will be given the opportunity to lead the team in rushing should he be deemed fully healthy. Barber, barring injuries to Guice and AP, likely won’t make it onto many fantasy rosters in 2020.

(2020)
View Full Schedule
Who Should I Draft?
Most Accurate Experts
for Peyton Barber
Do Not Sell
Are you looking to contact Customer Support about a subscription or account related question?
Yes
No, I'm a California resident looking for the California Consumer Privacy Act form