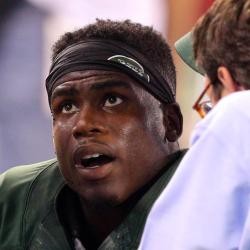 Quincy Enunwa suffered a neck injury in Sunday’s 17-16 loss to the Bills and will be shut down for the season.

Enunwa will be shut down for the season. He previously missed the entire 2017 season with a neck injury, but returned healthy in 2018. Enunwa signed a four-year, $36 million dollar contract in December. It is unclear at this time if the injury is career-threatening. The Jets acquired Demaryius Thomas on Tuesday, who will provide WR depth with Enunwa out.

Deposit $10 at a DFS partner site you have NOT played at and get a FREE 6 Month HOF Subscription!
Claim Offer
Most Accurate Experts
for Quincy Enunwa
Consensus Rankings
View All Rankings