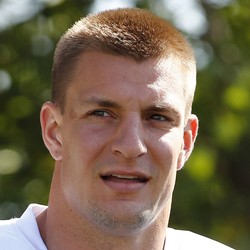 The fact that Tom Brady won't have a full offseason with his new receivers, you have to wonder if he'll gravitate towards his old friend Gronkowski. During Gronkowski's career, he posted top-five-type numbers in 40.9 percent of his games, which is easily the best of all-time. In fact, the closest tight end, Travis Kelce, has posted those numbers in 31.6 percent of his games. While Gronkowski isn't the young stud he once was, but he should be a consistent presence while on the field with Brady.

Rob Gronkowski traded to the Buccaneers for a fourth-round pick

Former Patriots TE Rob Gronkowski is officially headed to the Buccaneers in a trade that will send him and a seventh-round pick to Tampa Bay for a fourth-round pick.

According to Jay Glazer, Gronkowski has passed his physical and this trade is now official. Gronk will be reunited with Tom Brady, his quarterback of nine years from their time in New England. Now 30 years old, Gronkowski will look to shake off the rust in Tampa Bay after sitting out the 2019 season to pursue a career with the WWE. He adds to the Buccaneers arsenal of offensive weapons heading into 2020, which includes WRs Mike Evans and Chris Godwin and for now, TE O.J. Howard. Howard was reportedly put on the trade block in mid-April, and now we know why that might have been the case, as the Bucs knew all along Gronkowski wanted to come play for them and Brady. It’ll be interesting to see how things pan out, but one would have to think Gronk is at least a borderline top-10 TE right out of the gates.

Deposit $10 at a DFS partner site you have NOT played at and get a FREE 6 Month HOF Subscription!
Claim Offer
Who Should I Draft?
Most Accurate Experts
for Rob Gronkowski
Consensus Rankings
View All Rankings
Do Not Sell
Are you looking to contact Customer Support about a subscription or account related question?
Yes
No, I'm a California resident looking for the California Consumer Privacy Act form