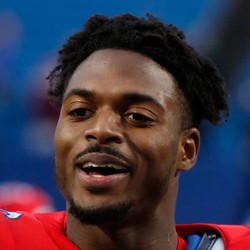 Robert Foster caught zero of his four targets in the Bills' Week 17 loss to the Jets.

With both John Brown and Cole Beasley inactive, Foster was thrust into a starting role and delivered one of the epic faceplants of the season. Foster, despite an impressive rookie campaign, has struggled to catch on since then. He's unlikely to rebound at this point and is a cut candidate in all formats including dynasty leagues.