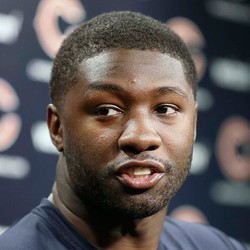 Roquan Smith and the Bears fear that he tore his pec muscle against the Cowboys on Thursday. The team is confirming the severity of his injury with an MRI.

Smith had been playing really well of late and this injury certainly comes with a cost to the Bears defense. Remove Smith from any IDP leagues and look for other options on the waiver-wire.

Deposit $10 at a DFS partner site you have NOT played at and get a FREE 6 Month HOF Subscription!
Claim Offer
Most Accurate Experts
for Roquan Smith
Consensus Rankings
View all Flex Rankings