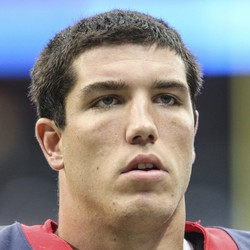 New York Jets tight end Ryan Griffin has been ruled out for Thursday Night Football against the Baltimore Ravens.

Ryan Griffin's absence is bad news for the entire Jets offense. While Robby Anderson, Jamison Crowder, and Le'Veon Bell will likely see more targets a result of Griffin being ruled out, they have a brutal matchup against the Ravens, and Ryan Griffin in the middle of the field would have helped open things up for the rest of the offense. Griffin was the TE3 in total fantasy points from Week 6 to Week 12.

Deposit $10 at a DFS partner site you have NOT played at and get a FREE 6 Month HOF Subscription!
Claim Offer
Most Accurate Experts
for Ryan Griffin
Consensus Rankings
View All Rankings