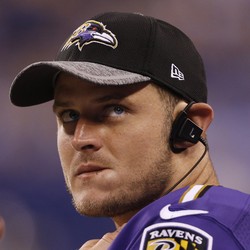 Ryan Mallett subs in for Flacco on TNF

Ryan Mallett went 3-for-7 for 20 yards and a touchdown in relief of Joe Flacco during the Ravens' 40-0 win over the Dolphins on Thursday.

After Flacco left the game with a concussion he suffered on a very dirty hit from Kiko Alonso, Mallett came in and led the Ravens into the end zone. Mallett isn't an intriguing fantasy option even if Flacco misses extended time though.