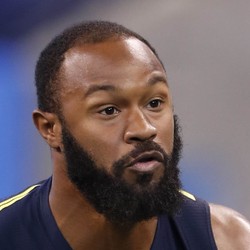 Samaje Perine was claimed by the Cincinnati Bengals on waivers from the Miami Dolphins.

Perine enters a roster with plenty of raw running back talent. With the threat of Joe Mixon holding out, the Bengals are likely looking for positional depth. Perine would figure unlikely to see any meaningful playing time, however. The Bengals still have Giovani Bernard on the roster, as well as last year's rookie picks in Rodney Anderson, who spent his rookie season recovering from an ACL tear, and Trayveon Williams, who is a solid but undersized back. Though Perine was a strong producer in his college days, he's found virtually no success at the NFL level, and could be just a camp body when all is said and done.

Deposit $10 at a DFS partner site you have NOT played at and get a FREE 6 Month HOF Subscription!
Claim Offer
Who Should I Draft?
Most Accurate Experts
for Samaje Perine
Consensus Rankings
View All Rankings
Do Not Sell
Are you looking to contact Customer Support about a subscription or account related question?
Yes
No, I'm a California resident looking for the California Consumer Privacy Act form