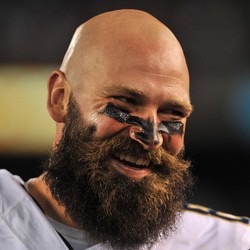 The Detroit Lions continued to overhaul their tight end position, releasing Wes Saxton and signing 30-year-old veteran Sean McGrath, who has logged 32 career catches and scored a pair of touchdowns in previous stints with the Seahawks, Chiefs, and Chargers.

McGrath is an in-line blocking specialist who doesn't offer up much as a receiver or for fantasy purposes. He'll likely battle Levine Toilolo for that role with the Detroit this summer.