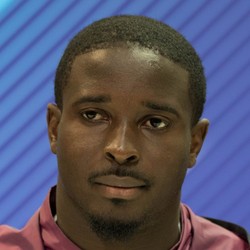 Sony Michel carried the ball a team-high 14 times for 61 yards (4.4 ypc), he also caught both his pass targets for nine yards.

Michel was drafted around the RB20 slot going into the 2019 season, and he disappointed most fantasy owners, finishing at RB28 in 0.5 PPR leagues. He finished his sophomore campaign with 247 rushing attempts for 912 yards (3.7 average) with seven touchdowns. Despite playing the entire season he caught only 12 passes for 97 yards. Much of Sony Michel's 2020 fantasy outlook will dependent on the futures of both quarterback Tom Brady and offensive coordinator Josh McDaniels. Assuming the situation remains relatively unchanged from last year Michel should not be one of the top 30 running backs drafted in August.

Deposit $10 at a DFS partner site you have NOT played at and get a FREE 6 Month HOF Subscription!
Claim Offer
Most Accurate Experts
for Sony Michel
Consensus Rankings
View all Flex Rankings