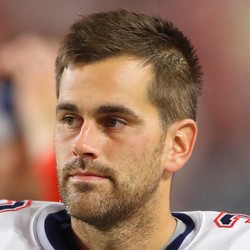 Stephen Gostkowski not ready to hang up the cleats just yet

Former Patriots kicker Stephen Gostkowski is confident he can bounce back in 2020 and is eager to sign with a team for the upcoming season.

Gostkowski was a member of the Patriots for a whopping 14 seasons. He started his career back in 2006 as a fourth-round pick out of Memphis. Gostkowski told Tom Curran of NBC Sports Boston that “I feel good. I’m starting to feel better,” after missing most of the 2019 campaign with a hip injury. If he’s able to take and pass a physical, It’s likely that he’s kicking for a team this upcoming season given his track record in the NFL, converting on 87.4% of his field goal attempts in his career.

Deposit $10 at a DFS partner site you have NOT played at and get a FREE 6 Month HOF Subscription!
Claim Offer
Who Should I Draft?
Most Accurate Experts
for Stephen Gostkowski
Consensus Rankings
View All Rankings
Do Not Sell
Are you looking to contact Customer Support about a subscription or account related question?
Yes
No, I'm a California resident looking for the California Consumer Privacy Act form