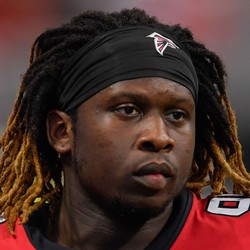 Takkarist McKinley picks up a sack

Takkarist McKinley recorded two solo tackles, one assisted tackle, one tackle for loss, and one sack in the Atlanta Falcons' Week 7 victory over the New York Giants.

McKinley has recorded sacks in four of the five games he's played this year, and has 5.5 so far this season. If he's still on the waiver wire, pick him up because he could be the addition that puts you over the top if he keeps up this pace.