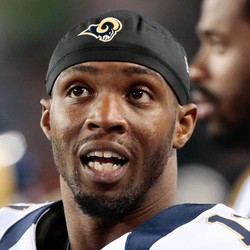 Cowboys wide receiver Tavon Austin caught one pass for 59 yards and a touchdown in Sunday's win over the Rams.

Despite only having one catch, Austin surprisingly led the Cowboys in receiving on Sunday thanks to their run-heavy approach. He has just three catches over his last eight games, however, so don't expect this kind of output too often.

Deposit $10 at a DFS partner site you have NOT played at and get a FREE 6 Month HOF Subscription!
Claim Offer
Most Accurate Experts
for Tavon Austin
Consensus Rankings
View All Rankings
Do Not Sell
Are you looking to contact Customer Support about a subscription or account related question?
Yes
No, I'm a California resident looking for the California Consumer Privacy Act form