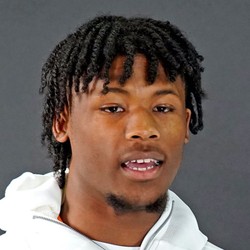 Tee Higgins being drafted at the top of the second round to be inserted into a potentially lethal offense is a recipe for fantasy success. While we may have to wait a while to see Higgins hit his ceiling, due to AJ Green still being there, the future is extremely bright for Higgins in Cincinnati. I fully expect him to become Joe Burrow's favorite target almost immediately. (If AJ Green is moved in a trade, Higgins will move up this Big Board)

Jay Morrison of The Athletic believes Tee Higgins will open the 2020 season in the Bengals' starting lineup.

"Even with a truncated offseason limiting how quickly Higgins can get up to speed, I fully expect the rookie second-round pick to be in the starting lineup when the season opens," Morrison writes. The rookie joins a crowded receiver group in Cincinnati as A.J. Green, Tyler Boyd, and John Ross are all still around. Even if Higgins opens the year as a starter he is likely to begin the season as a boom-bust fantasy option.