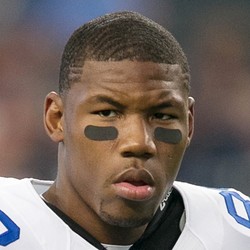 ESPN's Adam Schefter is reporting the Cowboys have declined the option on WR Terrance Williams' contract.

No surprise here. Despite all of the issues at wideout for the Cowboys prior to the Amari Cooper acquisition, Williams not only failed to step up and contribute, but he also failed to take the field. After battling off the field issues -- he was suspended by the league for three games in November -- and a nagging foot injury which landed him on IR in October, Williams will end his career in Dallas with a 2/18/0 stat line on three targets while only appearing in three 2018 contests. This, nearly one year removed from signing a four-year $17 million deal last March to remain with the Cowboys. Williams will attempt to rekindle his stalled career with a new club in 2019.

Deposit $10 at a DFS partner site you have NOT played at and get a FREE 6 Month HOF Subscription!
Claim Offer
Most Accurate Experts
for Terrance Williams
Consensus Rankings
View All Rankings