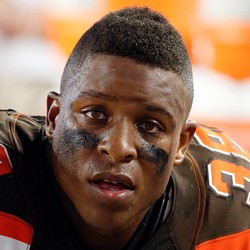 Terrell Watson makes case to be Browns' third running back

Terrell Watson had four rushes for 28 yards on Thursday night against the Falcons. He also caught two passes for 12 yards. Atlanta went on to beat Cleveland 24-13.

Watson is looking likely to beat out Raheem Mostert as the team's number three running back. He doesn't have much fantasy value right now, but would likely slide into a significant role if something were to happen to Isaiah Crowell.