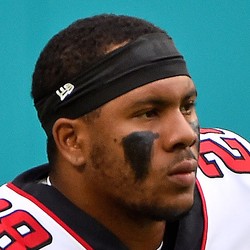 Backing up Tevin Coleman the Falcons entrusted Terron Ward with seven carries, which he converted into 35 rushing yards (5.0 avg). On his fourth carry of the night, in the early fourth quarter, Ward fumbled and lost the ball in the Buccaneers red zone as the Falcons were looking to extend their 27-20 lead. He also caught one pass for a three yards loss.

Terron Ward continues to be nothing more than a change of pace back for Tevin Coleman and the Falcons offense in the absence of star running back Devonta Freeman. There is little reason to be rostering Terron Ward, even if you think Freeman will miss a couple more weeks.