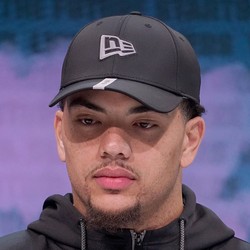 Lines up all over the field. Has the quick stop/go ability you want in a receiving tight end, knows how to run routes, though I wish he'd sell them a bit more. Also doesn't generate a whole lot of speed. Willing blocker who appears to have good form, but size limits his impact. Definitely found out why he is a tight end and not a receiver. Doesn't move well enough to be a receiver. Was surrounded by studs at LSU, didn't see a whole lot of attention. Inconsistent blocking at the second level. Not going to be faster than linebackers and isn't much bigger than cornerbacks. Will run routes into contact at times, needs to be smarter.

After medical testing at the NFL Combine, Moss was diagnosed with a Jones fracture in his foot and will undergo surgery.

Thaddeus Moss, the son of Randy Moss, wasn't able to participate in any of the drills at The NFL Combine. We now know that this was due to a Jones fracture, which he'll have surgery on here shortly. Moss will drop a bit in rankings because of it, but don't forget about him in this TE class. He could make a big impact for fantasy football when he's back and healthy.