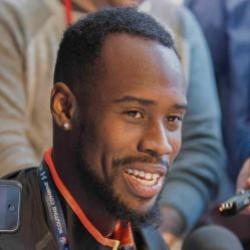 Tony Lippett played WR at Michigan State and was the Big Ten receiver of the year, but Dolphins might want him as a CB.

Lippett finished the 2014 season as team MVP and started at both WR and CB! I would agree with Kelly in that the Dolphins see him as more of a corner than receiver because of his quickness and ball skills. It is a nice combination of size and agility which was on display at the combine with top cone drill and shuttle numbers. This gives the DB room more depth and needed height to cover taller receivers in red zone packages. Another athlete has been added, let the coaches decide where he will line up.